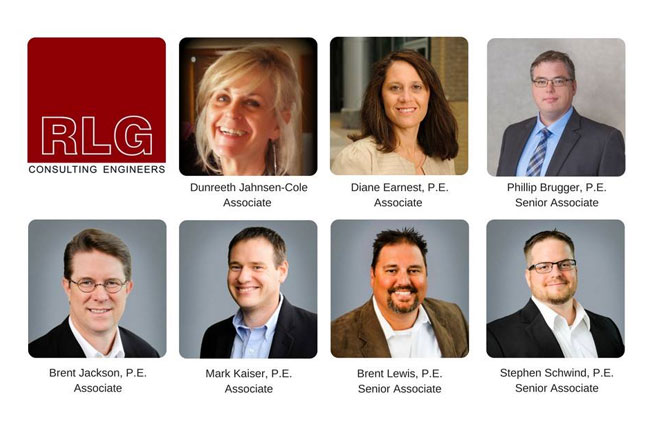 “We are honored to celebrate 65 years of engineering excellence with the addition of four new Associates and three Senior Associates,” says David Goodson, P.E. president and CEO of RLG Consulting Engineers. “We would not be where we are for 65 years without the hard work and dedication of employees like Phillip Brugger, Dunreeth Jahnsen-Cole, Diane Earnest, Brent Jackson, Mark Kaiser, Brent Lewis and Stephen Schwind.”

Dunreeth Jahnsen-Cole joined the RLG team in 2007 as an office manager. She brought with her more than 20 years of accounting and administrative management experiences from several Fortune 500 national and global companies. Jahnsen-Cole performs and oversees the functions of accounting, human resources, employee benefits, clerical and administrative support, supplies and maintenance.

Phillip Brugger, P.E. joined RLG in 1998 originally as a cad technician for the Civil Engineering Department. After obtaining his civil engineering degree from the University of Texas at Arlington, he moved into the role of project engineer and then to project manager. Brugger has worked on numerous project types over the years including education, health care, institutional, office, retail, roadways, utilities, religious and mixed use. Brugger holds a civil engineering license in Texas.

Diane Earnest, P.E. a member of the RLG team since 2011, demonstrates a strong understanding of the unique complexities of wood-framed and masonry construction as well as a sound grasp of seismic design. Earnest has spent a significant amount of time working on multifamily and educational projects. She communicates well with the construction team and aids the construction process with her knowledge of buildings, responsiveness to questions and openness to suggestions. She has also worked on commercial, parking and retail projects. Earnest is licensed in Texas, California and Washington.

Brent Jackson, P.E. joined RLG in 2012 with more than nine years of experience in structural engineering on a wide variety of commercial projects. He quickly established himself as an outstanding project manager with an excellent ability to communicate with the owners, architects, general contractors and other design team members. Jackson has worked on projects designed to resist high seismic forces as well as hurricane force winds. He has extensive knowledge of concrete and steel construction, having worked on projects across the country. His projects have ranged in size from single-story warehouses, twelve-story residential structures and 1,000,000 square foot office complexes. Jackson is licensed in Texas.

Mark Kaiser, P.E. joined RLG in 2014, with more than eight years of experience working on a variety of commercial and industrial projects. He has fast become a valued member of the RLG team with his extensive knowledge of seismic design and overall knowledge of construction practices.Kaiser has familiarity with a wide variety of building materials including reinforced concrete, post-tensioned concrete, steel, timber and masonry. He also has experience in creating three-dimensional building models using finite element analysis software for both gravity and lateral analysis of structures. Kaiser is licensed in Texas, California, Illinois and Michigan.

Brent Lewis, P.E. has more than 15 years of experience across a broad spectrum of Civil Engineering specializing in the design of infrastructure improvements for municipal clients. He currently oversees RLG’s Fort Worth office. His experience encompasses water transmission/distribution, wastewater collection, stormwater conveyance, detention systems, streets, highways, parking facilities and civil site development. He has performed these services for a variety of clients, including municipalities, transportation and river authorities, airports, industrial, commercial, retail, correctional and educational providers. Lewis’ responsibilities have ranged from analysis, design, construction and administration for both new and rehabilitated facilities. Lewis is licensed in Texas and Oklahoma.

Stephen Schwind, P.E. joined RLG in 2006 and quickly distinguished himself with his hard work and engineering talent. Schwind’s experience includes managing and coordinating the design and preparation of plans and specifications for the development of municipal and commercial projects. He oversees the implementation of the latest design software for use by technicians and engineers for design and production of drawings. Schwind is licensed in Texas.