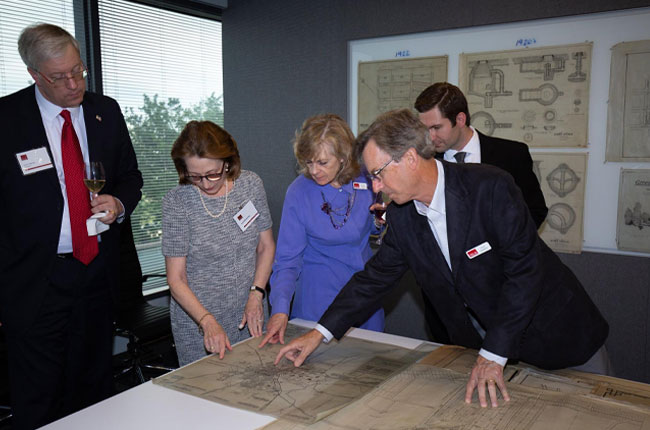 Dallas, TX, May 21, 2018, — RLG Consulting Engineers, a Dallas-based civil, structural, surveying and forensic engineering firm is celebrating 65 years of engineering excellence in 2018. On May 3, 2018 in honor of the company’s historic milestone, RLG hosted more than 300 guests for an open house and 65th anniversary celebration at the company’s new headquarters in Dallas, Texas. Guests were treated to cocktails and conversation, while touring the new office and perusing the company’s archives. Included in  the memorabilia were original linen drawings from the early 1920’s, company literature from the last several decades and vintage engineering and surveying equipment.

“When my father started the company in 1953, one of his core values was to provide a commitment of excellence to his clients. I am proud to say that for 65 years, we have maintained that commitment, while also creating new partnerships that we hope will last for the next 65 years,” says David M. Goodson, CEO of RLG. “We owe our many years of business success to our talented team and the support of our loyal clients and partners. We would not be where we are today without them.”

The firm has a long-standing history with the city of Dallas, dating back to the early 1900’s when a series of floods from the Trinity River destroyed small bridges connecting Oak Cliff to Downtown Dallas. The destruction and aftermath led to demands from the public to provide a high-water bridge.

Ernest Lindley Meyers and Edward N. Noyes, two young engineers from the University of Kansas, came to Dallas and immediately swung into action to build the Dallas-Oak Cliff Viaduct which is now known as the Houston Street Viaduct. The two engineers joined forces to create Myers & Noyes Engineers to provide civil engineering design and surveying services throughout North Texas. The company experienced rapid growth and opened an office in Corpus Christi. In 1953, Myers retired and transferred the Dallas office to Raymond L. Goodson, JR.

In 1961, Goodson incorporated the Dallas office as Raymond L. Goodson, Jr. Inc. Consulting Engineers, which is known today as RLG Consulting Engineers. Upon retiring in 1983, Goodson transitioned ownership to Norman Harper, John Stull, David Goodson and Robert Wood. His son David M. Goodson joined the firm in 1981 and created the structural engineering division. Harper, Stull and Wood were responsible for overseeing the civil engineering and surveying departments. Harper retired in 1995, Wood in 2003 and Stull in 2014. Today, David Goodson serves as president and CEO of RLG Consulting Engineers.

Since RLG’s inception in 1953, the company has grown to more than 80 employees across three offices located in Dallas, Fort Worth and Peoria, IL. Clients include some of the nation’s finest institutions including Southern Methodist University, Texas Health Resources, UT Southwestern, Baylor Scott & White, Erickson Living Retirement Communities and many more.